A forward contract—or forward—is an OTC derivative. In its simplest form, it is a trade that is agreed to at one point in time but will take place at some later time. For example, two parties might agree today to exchange 500,000 barrels of crude oil for USD 92.08 a barrel three months from today.

A forward contract is specified with four variables:

In our example, oil is the underlier. The notional amount is 500,000 barrels. The delivery price is USD 92.08 per barrel. The settlement date is the actual date three months from now when the oil will be delivered in exchange for a total payment of USD 46.04MM.

The party who receives the underlier is said to be long the forward. The other party is short.

At settlement, the forward has a market value given by

where s is the cash price of the underlier at settlement. This formula derives from the fact that, at settlement, the long party is paying a delivery price k for an underlier then trading at price s. The difference between those two prices, multiplied by the notional amount, is the market value of the forward.

Formula [1] tells us that forwards have linear payoffs. This is depicted in Exhibit 1. Compare Exhibit 1 with the options payoffs depicted in the article options spreads.

Exhibit 1:Forwards have linear payoffs. Graphs depict the profit or loss from holding a forward as a function of underlier value at settlement.

Suppose the forward in our oil example were cash-settled. On the settlement date three months from today, no oil would change hands, and there would be no payment of USD 21.04MM. If the cash price at settlement were, say, USD 47.36, then the forward would settle with a single payment of

made by the short party to the long party.

Issues such as the time value of money, short-term supply and demand, market expectations of future spot prices and cash-and-carry arbitrage tend to make forward prices diverge from spot prices, but relevant factors vary from one market to the next.

A graph of forward prices for different maturities is called a forward curve. Exhibit 2 shows the forward curve for West Texas intermediate crude oil on September 15, 2005. 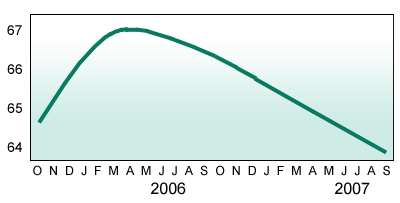 Forwards are a convenient vehicle for hedging or speculation. For example, an airline can conveniently hedge its fuel costs by purchasing jet fuel several months forward. The hedge eliminates price exposure, and it doesn’t require an initial outlay of funds to purchase the fuel. The airline is hedged without having to take delivery of or store the jet fuel until it is needed. It doesn’t even have to enter into the forward with the ultimate supplier of the jet fuel. If the forward is cash settled, the hedge can be put on with any counterparty.

Prior to settlement, a forward has a market value given by

where f is the current forward price and d is the discount factor. Returning to our oil example, suppose it is now a month until the contract settles, one-month Libor is 2.18, and the one-month forward price for oil is USD 85.16. Then

and the forward has market value

There are active forward markets on a variety of commodity, energy and financial underliers. These include forward markets for coffee, cocoa, cotton, natural gas, oil and electricity, just to name a few examples. The largest forward market is the interbank foreign exchange forward market. Forward rate agreements (FRAs) are cash-settled forwards on short-term loans.

Forwards entail market risk, presettlement risk and settlement risk. With cash-settled forwards, there can also be a risk of manipulation of the underlier price index used for calculating the settlement value. This has been a problem in energy markets when the paper market dwarfed the physical market. In such a situation, a small physical transaction performed at an off-market price could impact the settlement value of a far greater volume of paper transactions. It was also a problem for forward rate agreements linked to Libor, which was actively manipulated until 2012.

Forwards are similar to futures. The primarily difference is that forwards trade OTC while futures are exchange traded. Daily margining of futures eliminates presettlement and settlement risk for those contracts.