A bond is a long-term debt obligation structured as a security. Unlike a loan, in which a debtor directly borrows funds from a creditor, with a bond, the debtor issues securities (bonds) and creditors purchase them. Bonds come in many forms, including:

Bonds are issued by various entities, including

When people speak of “bonds” without qualification, they are usually referring to traditional coupon bonds. This article provides an overview of bonds but with a specific focus on coupon bonds.

The contractual provisions of a bond are detailed in an indenture, which is also called the deed of trust. This identifies a trustee who holds the indenture, supervises principal and interest payments, and represents bondholders in the event of default.

A bond’s par value is a target for the price at which the bond will be issued. The actual issue price is generally close to the par value but is determined by market conditions on the day of issue. After that, the issuer makes fixed periodic interest payments, called coupons. Coupons are typically paid semiannually, but they can also be paid annual, quarterly or monthly. Coupons continue to be paid until the bond’s maturity date, at which time one final coupon is paid along with the bond’s par value.

A bond’s yield indicates the value of coupons paid annually, expressed as a percentage of par. For example, a USD 100 par bond paying semiannual coupons of USD 2.3 has a yield of 4.6%. 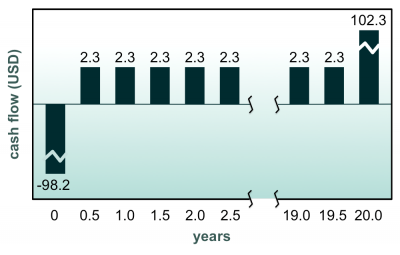 Exhibit 1: Cash flows for a 4.6% 20-year bond. The bond has a par value of USD 100. In this example, it issues below par at USD 98.2. It then makes semiannual coupon payments of USD 2.3. On the maturity date, a final coupon is paid along with the par value.

A bond’s term is the length of time between its issuance date and maturity date. When people speak of a bond’s maturity, they may be referring to its term, or they may mean the time remaining until it matures. Among discount and coupon-bearing instruments, only those with longer terms are called bonds. The criteria of “long-term” is not clearly demarked. In the corporate sector, instruments with terms of five or more years may be called bonds. In the US Treasury market, instruments must have an original maturity exceeding ten years to be called a bond.

A note is essentially a short-term bond. It is a coupon-bearing instrument with a term greater than nine months and up to ten years. These include medium-term notes and Treasury notes. A fixed income instrument with a term of less than a year would not be called a bond. These are money market instruments. They include T-bills, commercial paper and bankers acceptances.

Debt obligations issued as a securitization of other assets (such as mortgages or credit card receivables) are called bonds irrespective of their anticipated term.

Bonds are issued in different ways. The US Department of Treasury periodically auctions Treasury securities directly to investors. Most corporate and municipal bonds are sold through investment banks in public offerings. Some bonds are also issued as private placements.

There is an active secondary market for bonds, although not all bonds have the same liquidity. Some trading takes place on exchanges. For example, a number of bonds are listed on the New York Stock Exchange. Most bonds trade over the counter (OTC). Brokers or dealers trade bonds via phones or computer networks. Usually, if an investment bank handles the public offering of a bond, it will make a market in that instrument. It serves as a dealer, always ready to quote firm bid or offer prices for that particular bond.