Brownian motion is a simple continuous stochastic process that is widely used in physics and finance for modeling random behavior that evolves over time. Examples of such behavior are the random movements of a molecule of gas or fluctuations in an asset’s price. Brownian motion gets its name from the botanist Robert Brown (1828) who observed in 1827 how particles of pollen suspended in water moved erratically on a microscopic scale. The motion was caused by water molecules randomly buffeting the particle of pollen. Brown posed the problem of mathematically describing the observed movement, but he did not solve the problem himself.

Intuitively, we may think of Brownian motion as a limiting case of some random walk as its time increment goes to zero. This is illustrated in Exhibit 1. 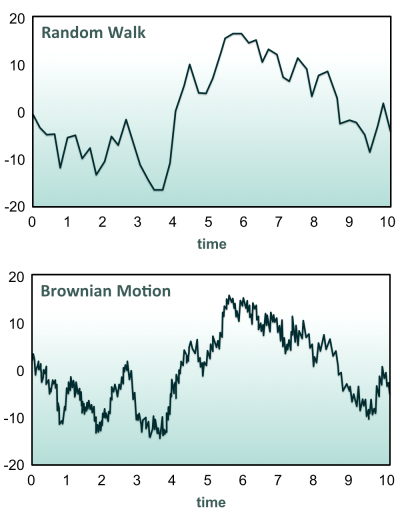 Let’s formalize this. A univariate Brownian motion is defined as a stochastic process B satisfying

Brownian motion is a martingale. It has a number of other interesting properties. One is that realizations, while continuous, are differentiable nowhere with probability 1. Realizations are fractals. No matter how much you magnify a portion of graph of a realization, the result still looks like a realization of a Brownian motion.