Bonds can be issued in three forms, which differ in how they evidence ownership.

Bearer bonds pose the risk that certificates might be lost or stolen. They also have a reputation for being attractive to criminals, who have used them to launder money or otherwise transfer large sums without leaving a paper trail. For these reasons, bearer bonds are no longer issued in the United States, and they are becoming less common around the world. Eurobonds are issued in bearer form. 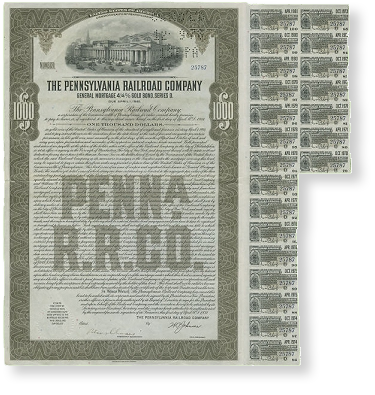 Exhibit 1: Pennsylvania Railroad 4.25% bearer bond of 1981. The bond’s term was fifty years, and coupons were semiannual. This specimen has 22 coupons still attached. 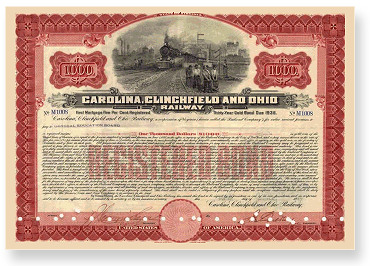 Exhibit 2: Carolina, Clinchfield and Ohio Railroad 5% registered bond of 1938. The bond’s term was thirty years. This specimen has been cancelled by the transfer agent by punching holes along the bottom.

With book entry, ownership of bonds is recorded electronically by a central depository. If a bond is transferred, the depository changes its records and provides a receipt for the transaction. Generally, brokers or dealers are listed as owners in place of their clients who are the beneficial owners. The broker or dealer maintains its own records of beneficial ownership. If it crosses a trade between two of its own clients, or if it is a counterparty to a client trade, the broker or dealer doesn’t even have to inform the depository of the transaction. Certificates are held by the depository. There is no real need for the certificates, but a single certificate may be held for an entire bond issuance. Due to its speed and efficiency, book entry is increasingly becoming the norm for bonds.