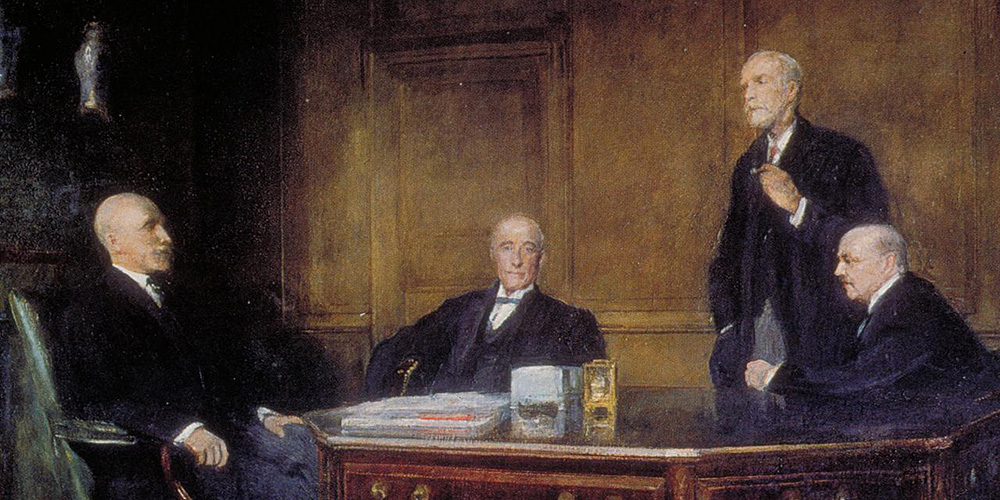 The collapse of Britain’s Barings Bank in February 1995 is a quintessential tale of financial risk management gone wrong. The failure was unexpected. Over a course of days, the bank went from apparent strength to bankruptcy. Barings was Britain’s oldest merchant bank. It had financed the Napoleonic wars, the Louisiana purchase, and the Erie Canal. Barings was the Queen’s bank. What really grabbed the world’s attention was the fact that the failure was caused by the actions of a single trader based at a small office in Singapore.

The trader was Nick Leeson. He had grown up in the Watford suburb of London. After attending university, he worked briefly for Morgan Stanley before joining Barings. At both firms, he worked in operations, but shortly after joining Barings, he applied for and received a transfer to the Far East. His first task when he arrived was working through a back-office mess in Jakarta. The bank held GBP 100MM in stock certificates and bearer bonds that were not in deliverable form. Many of the stocks had been purchased on behalf of clients. Because the stock market had subsequently declined, the clients were trying to avoid taking delivery—they complained that certificates were in the wrong denomination, not properly document or in physically unacceptable condition. Over a period of 10 months, Leeson worked his way through the certificates, addressing the problems and making delivery.

Barings had maintained an office in Singapore since 1987. Called Baring Securities (Singapore) Limited (BSS), it had originally focused on equities, but its volume of futures trading on the SIMEX (today’s Singapore Exchange) was growing. Without a seat on the exchange, BSS was having to pay commissions for all its transactions. The next step was to purchase a seat and hire traders.

Leeson’s accomplishments in Jakarta attracted the attention of Barings management. When he applied for a position within BSS, they not only accepted him, but they made him general manager with authority to hire traders and back office staff.

Leeson arrived at BSS in 1992 and started hiring local staff. As general manager, Leeson’s job was not trading, but he soon took the necessary exam so that he could trade on SIMEX along with his small team of traders. He was now general manager, head trader and, due to his experience in operations, de facto head of the back office. Such an arrangement should have rung alarm bells, but no one within Barings’ senior management seemed to notice the blatant conflicts. Leeson and his traders had authority to perform two types of trading:

Perhaps it was the inherent lack of risk in such trading that prompted people to not be concerned about Leeson wearing multiple hats.

Leeson took unauthorized speculative positions primarily in futures linked to the Nikkei 225 and Japanese government bonds (JGB) as well as options on the Nikkei. He hid his trading in an unused BSS error account, number 88888. Exactly why Leeson was speculating is unclear. He claims that he originally used the 88888 account to hide some embarrassing losses resulting from mistakes made by his traders. However, Leeson started actively trading in the 88888 account almost as soon as he arrived in Singapore. The sheer volume of his trading suggests a simple desire to speculate. He lost money from the beginning. Increasing his bets only made him lose more money. By the end of 1992, the 88888 account was under water by about GBP 2MM. A year later, this had mushroomed to GBP 23MM. By the end of 1994, Leeson’s 88888 account had lost a total of GBP 208MM. Barings management remained blithely unaware as losses accelerated. On February 23, 1995, Nick Leeson hopped on a plane to Kuala Lumpur leaving behind a GBP 827MM hole in the Barings balance sheet.

As a trader, Leeson had extremely bad luck. By mid February 1995, he had accumulated an enormous position—half the open interest in the Nikkei future and 85% of the open interest in the JGB future. The market was aware of this and probably traded against him. Prior to 1995, however, he just made consistently bad bets. The fact that he was so unlucky shouldn’t be too much of a surprise. If he hadn’t been so misfortunate, we probably wouldn’t have ever heard of him.

Traders sometimes speculate without authorization. Presumably, a few are able to cover their tracks. Others are caught. When they are caught, they are fired, and their employer eats the loss. Usually, neither the trader nor his employer has any interest in publicizing the incident. Leeson made headlines precisely because he was so unlucky. By the time he was discovered, he had bankrupted his employer. Publicity was unavoidable.

What is amazing about Leeson’s activities is the fact that he was able to accumulate such staggering losses without Barings’ management noticing. As Leeson lost money, he had to pay those losses to SIMEX in the form of margin. Leeson needed cash. By falsifying accounts and making various misrepresentations, he was able to secure funding from various companies within the Barings organization and from client accounts. His misrepresentations were flimsy at best. For example, he claimed that he needed funds to make margin payments on behalf of BSS clients, and he gave a technical argument related to how the SIMEX collected margin as justification. This claim was false. It was actually against SIMEX rules for a broker to post its own money as margin for a client. Even if the claim were true, the funds would have been needed only temporarily—until the client could make payment. Instead, Leeson continued to ask for ever more funding. Most of this came from three companies within the Barings organization:

Exhibit 1 tracks the funding of BSS by these three companies in the months leading up to Barings’ collapse. 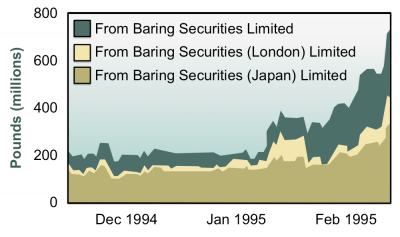 Exhibit 1: Funding for Baring Securities (Singapore) Limited (BSS) came primarily from three companies within the Barings organization. This exhibit tracks their funding of BSS in the months leading up to the failure of Barings. Essentially all the funding was used by Leeson to make margin payments to SIMEX. Source: Bank of England (1995).

Despite his having to fund millions of GBP in losses, there were various factors that allowed Leeson to avoid discovery. At the time, there was a merger going on between two parts of the Barings organization. Barings had acquired stock brokerage Henderson Crosthwaite in 1984, which became BSL. Originally, BSL was run as an entirely separate company from the banking business, which was called Baring Brothers and Company (BB&Co.). This is indicated in Exhibit 2. 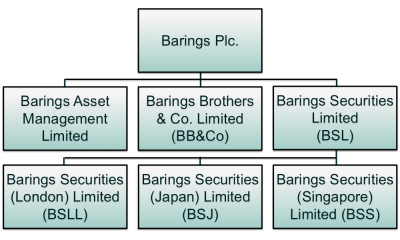 Exhibit 2: An abbreviated organizational structure for Barings prior to the 1993 merging of BB&Co. and BSL. Entities not relevant to this article have been omitted. For example, BSL also had offices in New York and Hong Kong. Source: Bank of England (1995).

In November 1993, BSL was merged into BB&Co. in anticipation of a subsequent initiative to form a Barings Investment Bank (BIB). The merger was not easy because the two firms had markedly different cultures. It was a distraction right in the middle of Leeson’s tenure at BSL. The new organizational structure following the merger is indicated in Exhibit 3. 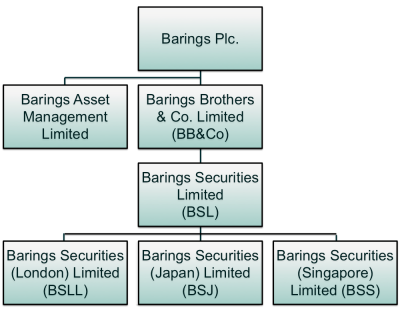 Exhibit 3: An abbreviated organization structure for Barings following the 1993 merging of BB&Co. and BSL. In 1994, BB&Co. and BSL became part of the new BIB. Source: Bank of England (1995).

Barings was just starting to form a risk management function. Risk controllers were appointed in London, Tokyo and Hong Kong during 1994, but not in Singapore. In BSS, Leeson effectively controlled the front and back offices. There was no middle office. Also, there was no single person within Barings responsible for supervising Leeson.

As part of the 1993 reorganization, Barings had adopted a “matrix” approach to management of its offices. There was one reporting structure based upon products that cut across all offices. Another was based upon operations, ensuring local management of such items as systems, controls, settlement and accounting. Employees complained that lines of reporting were not always clear.

Leeson was involved with two “products”:

During 1994, his “product” line of reporting could arguably have been to either Ron Baker, who managed derivatives, or Mike Killian, head of Global Futures and Options Sales. Locally, Leeson could have reported to James Bax, who was head of the Singapore office, or to Simon Jones, who was Regional Operations Manager for South East Asia.

Another issue was that Leeson was an accomplished liar. He falsified records, fabricated letters and made up elaborate stories to deflect questions from management, auditors and even representatives of SIMEX. Leeson actively played on people’s insecurities. He notes in his (1996) book that:

People at the London end of Barings were all so know-all that nobody dared ask a stupid question in case they looked silly in front of everyone else.

Some people did raise concerns about Leeson’s activities. In a January 1995 internal e-mail, Brenda Granger, Head of Futures and Options Settlements in London stated

Awaiting breakdown from my buddy Nick  (once they creatively allocate the numbers).

Such concerns went largely unheeded. Leeson was a celebrity within Barings. While he was secretly accumulating losses in account 88888, he was publicly recording profits in three arbitrage trading accounts, numbers 92000, 98007 and 98008. This was accomplished through cross-trades with account 88888. By performing futures transactions at off-market prices, Leeson was able to achieve profits in the arbitrage accounts while placing offsetting losses in the 88888 account. During 1994, Leeson booked GBP 28.5MM in false profits. This was a staggering profit to earn from futures arbitrage, but it ensured that Barings employees earned bonuses that year. Needless to say, there was little incentive for employees to question the unusually high arbitrage profits. If anything, Leeson was viewed as a star trader who was not to be interfered with.

In a famous 1993 quote, Peter Baring, Chairman of Barings, commented to Brian Quinn, Director of the Bank of England that

The recovery in profitability has been amazing following the reorganization, leaving Barings to conclude that it was not actually terribly difficult to make money in the securities markets.

Six days after fleeing Singapore, Leeson was arrested in Frankfurt trying to make his way back to London. He was returned to Singapore to stand trial. Convicted of fraud, he was sentenced to six and a half years years in Singapore’s Changi prison. While there, he contracted cancer, which he survived, and was divorced by his wife. For good behavior, he was released from prison early, in July 1999.