In the 1999 comic movie The Spy Who Shagged Me, fictional spy Austin Powers has his “mojo” stolen by a Dr. Evil. With his mojo gone, Powers loses his manliness, decisiveness and vitality. Don’t ask what mojo is. The term is as obvious as it is imprecise. In finance, alpha is similar. Alpha is to a portfolio manager what mojo is to Austin Powers. Unlike mojo, we can define alpha. It is a RAPM obtainable through a regression of a portfolio’s returns against those of a benchmark. But this doesn’t capture the significance of alpha to the investment community or the emotions it engenders. There are lots of RAPMs out there, but there is only one alpha. You never hear portfolio managers boasting about their Sharpe ratio over beers.

Alpha was defined by Michael Jensen (1968). He was investigating the emerging efficient market hypothesis and wanted to determine whether mutual fund managers’ historical returns indicated an ability for some to outperform the overall market. A simple approach would have been to compare mutual fund annual returns to annual returns of the market portfolio, which might be represented by some broad index, such as the S&P 500. Such a comparison could be misleading because it doesn’t take into account risk. William Sharpe (1964) had recently published his capital asset pricing model (CAPM), which states that a portfolio’s expected return will increase with its systematic risk (beta) according to the formula

Jensen was interested in whether mutual fund managers add value over the long-term. Could they—through skill or access to privileged information—outperform the market reasonably consistently, year after year? This was not about having randomly good or bad years, but about having good years with noticeable consistency. The CAPM formula [1] doesn’t accommodate this possibility, so Jensen added a term α to it that does:

and alpha was born. This allows for a persistent positive contribution to a portfolio’s expected return due to the manager’s skill or privileged information.

Jensen was not saying that some mutual fund managers do consistently outperform the market. His model simply allowed for that possibility, so he might test for it. His next step was to calculate some mutual fund’s alphas and see if any were positive. He gathered annual return data for 115 mutual funds and the S&P 500, which he used as a proxy for the market portfolio. He used fund returns after fees but ignored any sales loads. He had complete data for 1955-1964, but some funds had data going back as far as 1945, which he used as well. He performed a regression for each mutual fund to determine its alpha. His estimated alphas for all 115 mutual funds are summarized in Exhibit 1, which is reproduced from his paper. 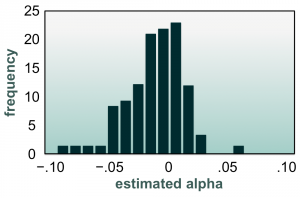 Exhibit 1: A frequency distribution of the alphas Jensen estimated for 115 mutual funds based on at least ten years of data for each. The vast majority have estimated alphas that are less than zero. The average fund’s alpha was –.011, (that is –1.1%). Results are after fees but not including sales loads. Returns, and hence alphas, are with continuous compounding. Reproduced from Jensen (1968).

An examination [of the data] … reveals only 3 funds which have performance measures which are significantly positive at the 5% level. But before concluding that these funds are superior we should remember that even if all 115 of these funds had a true α equal to zero, we would expect (merely because of random chance) to find 5% of them or about 5 or 6 funds … at the 5% level.

Jensen’s results leant strong support for the efficient market hypothesis, suggesting that no investment managers have positive alpha. Today, few practitioners recall Jensen’s paper, but they all know what alpha is. There are many RAPMs at investment managers’ disposal, including the Sharpe ratio and the Treynor ratio, but none is as popular as alpha. Alpha isn’t actually calculated that often. This may be partly due to the fact that it requires many years of performance data. Another reason, no doubt, is that Jensen’s conclusion has been reaffirmed many times. Investment managers’ empirical alphas tend to be embarrassingly negative.

Instead, alpha has become a symbol. It is a one-word moniker for investment managers’ belief they can outperform the market. Alpha is out-performance, and it is the job of an active manager to produce alpha. There are investment strategies with names like “alpha transport” and books with titles like Searching for Alpha. If active investment management were a religion, alpha would be its god.