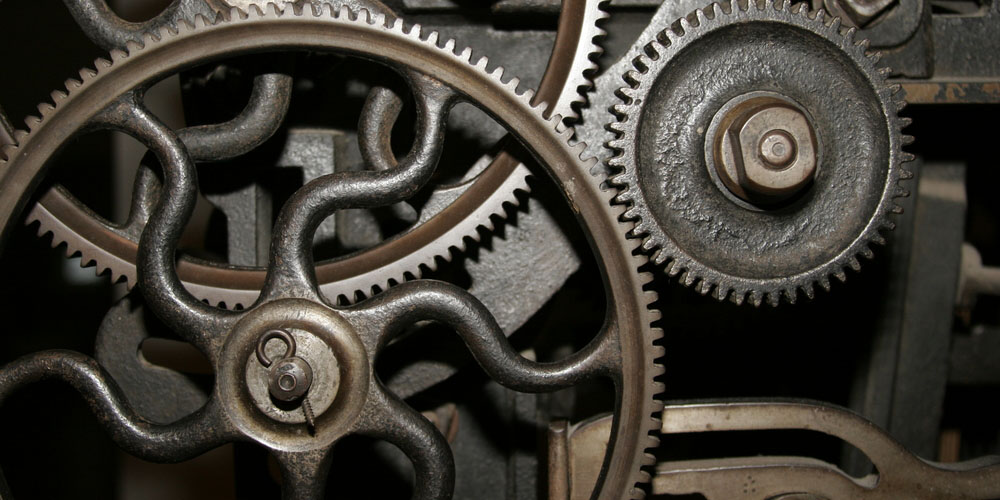 Geoffrey Poitras – who wrote a (2006) history of the topic – describes Macaulay’s duration as an “intrigue.” Duration is a single formula with two completely different financial interpretations. Both interpretations have practical utility. Deriving the mathematical link between them is a delightful application of elementary calculus – and a lesson in dimensional analysis. On top of all this, one of those two interpretations underlies the important technique of portfolio immunization.

Little of this is evident in the bland textbooks finance students are sometimes forced to read. To remedy that, let’s take a second look at Macaulay’s duration.

One book and one article introduced the two interpretations we call duration. The book was by Frederick R. Macaulay (1938). The article was by Lawrence Fisher (1966). Neither author focused his work on duration. For Macaulay, duration was a detail in a vast study. For Fisher, it was an afterthought to an otherwise uninteresting article.

Macaulay and His Duration

Macaulay was not an actuary. If you have heard he was, it is because he is sometimes confused with his father, Thomas B. Macaulay, who served as chief actuary and later president of Sun Life of Canada. Our Macaulay, Frederick R., started his career as an academic but gradually transitioned to Wall Street, co-founding an investment management firm with Allen Bernstein in 1934. Bernstein’s son, Peter, would later head the firm and become famous for launching the Journal of Portfolio Management and writing popular books on financial history, including Capital Ideas: The Improbable Origins of Modern Wall Street (1991).

Even at his new firm, Macaulay continued to work on a massive study of railroad bonds for the National Bureau of Economic Research, which he finally published in 1938. As part of that study, he categorized bonds, not according to their maturity, but according to a weighted average time to the payment of each of their cash flows – coupons and return of principal. He explained that, if two bonds have the same maturity, but one has a higher coupon rate, that bond “represents an essentially shorter term loan”. That bond would have a shorter duration.

Macaulay proposed his duration measure for bonds, but it is applicable to any stream of (positive or negative) cash flows, so long as the size and timing of each cash flow are fixed. Suppose cash flows in amounts si will occur at times ti. Amounts can be in any currency, but let’s assume dollars. Times are measured in years. Let p be the present value of all the cash flows and pi the present value of the ith cash flow. Then

Macaulay’s duration is then defined as

A 10-year Treasury bond, for example, might have a duration of 9 years, depending on current interest rates. Rising interest rates suppress durations, as cash flows further in the future are discounted more heavily by the formula. Irrespective of interest rates, the duration of a single cash flow s1 always equals time until it is paid. 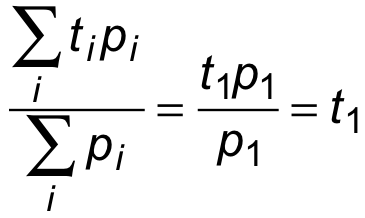 For example, the duration of a zero coupon bond equals its time to maturity.

Duration as a Factor Sensitivity

Its essential component is the term dp/dy, which captures the sensitivity of present value p to changes in yield to maturity (i.e. internal rate of return) y. 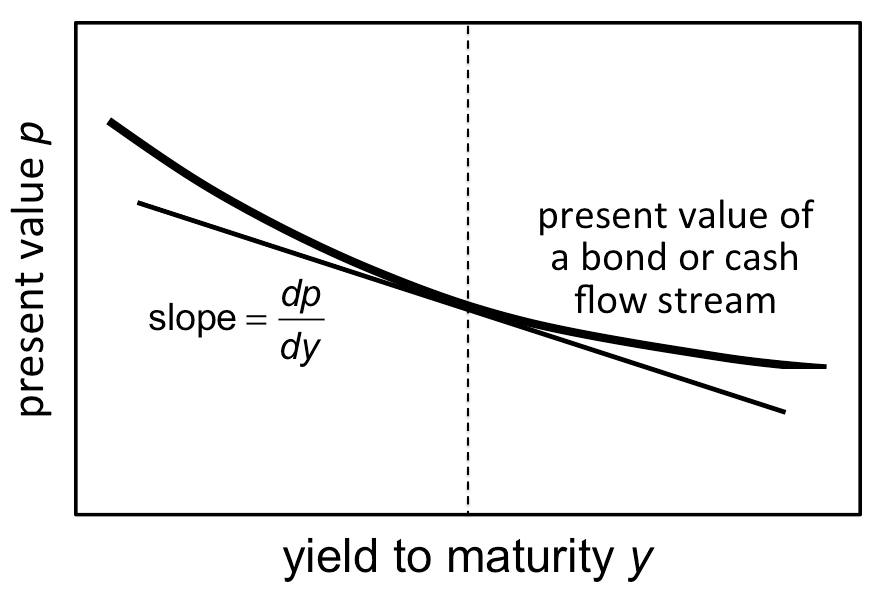 Because bonds lose value as interest rates rise, dp/dy is negative for bonds. Inserting a minus sign makes the factor sensitivity positive. Inserting the 1/p term scales it, so two bonds and/or cash flow streams can be compared irrespective of their present values.

By assuming yield y is continuously compounded – let’s denote it yc – Fisher’s arrived at a factor sensitivity precisely equal to Macaulay’s duration. If you have fond memories of your first calculus course, you will enjoy the simple derivation:

We conclude that, if Macaulay duration is calculated with a continuously compounded yield yc,

Continuous compounding is not used in practical work, so Fisher calculated the same factor sensitivity but with a yield to maturity compounded n times a year – which we can denote yn. The derivation is just as simple, so take a minute and try it yourself. Here is the result.

Again, we are now discounting cash flows with yield to maturity yn compounded n times a year. In this case, the right hand side is Macaulay duration divided by (1 + yn / n). Because it is a modification of Macaulay’s duration, it has come to be called modified duration:

It is easy to get lost in the mathematics, so here are a couple examples to show how simple and practical duration is as a factor sensitivity. Both examples apply whether you use duration with a continuously compounded yield or modified duration with a yield compounded n times a year.

Generalizing from these two examples, a bond or cash flow stream’s present value will rise (fall) by a percentage approximately equal to its duration for every 100 basis points fall (rise) in its yield.

If you perform dimensional analysis on Macaulay’s formula for duration, dollars cancel from the numerator and denominator. You are left with years, Macaulay duration is measured in years.

One thing to be aware of when performing dimensional analysis on derivatives is the fact that differentials are measured in the same units as the variables they are differentials of.

It may appear yield is measured in %/year, but wait! Are percentage points even units?

The numbers are unimportant. Focus on the notation. No one would claim a decimal point is a unit, but then neither can a percentage symbol be a unit. Percent symbols and decimal points are just conventional notation for expressing numbers. They are not units.

This means yields are measured in inverse years – that is 1/year – so modified duration is measured in their reciprocal, which is years.