What The 4 T’s Overlook 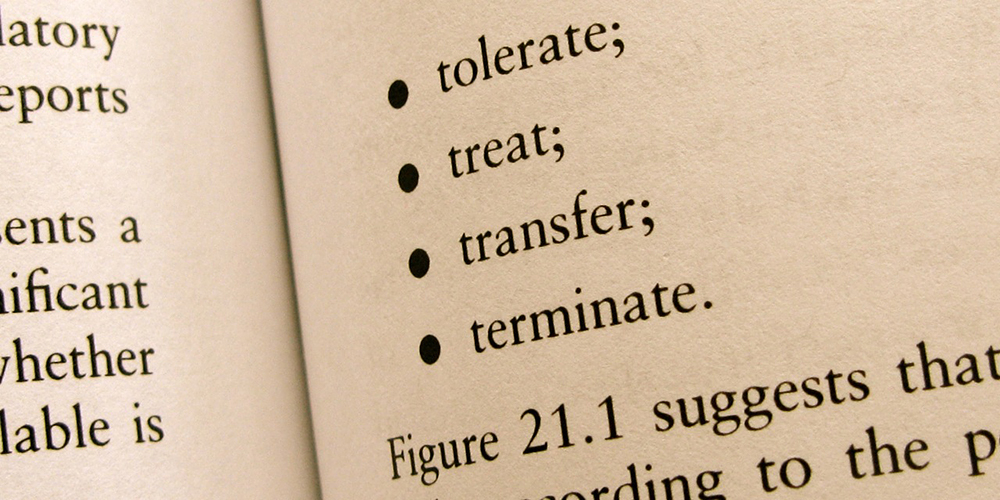 If you have been active in risk management for a while, you have probably heard of the 4 T ‘s. These—at a very high level—are the four possible responses to risk. Conveniently, each begins with the letter T:

They appear in various risk management standards. They pop up in books, articles and web searches.

Would you believe they are incomplete?

They are indeed. There is a fifth response not covered by the other four.

I’ll give you a hint: It is widely used by insurance companies.

Do you know what it is?

The answer is slightly counter-intuitive, so I won’t tell you right away. Let’s start with some background.

In my 2004 paper Defining Risk, I identify the two essential components of risk:

Uncertainty is self-explanatory. If there is something you don’t know, you are uncertain.

Exposure is having “skin in the game”—a reason to care. You may be uncertain what will happen to the price of Google stock tomorrow. If you have no position in Google stock, you are not exposed—you are uncertain, but you don’t face risk.

In my paper I give the example of a man jumping from an airplane without a parachute. Some might say he is taking extraordinary risk, but that’s not true. He is exposed because his life is on the line. But if he is sure to die, he faces no risk. Risk requires uncertainty.

Many risks can be reduced or eliminated by reducing or eliminating exposure. Suppose a wheat farmer faces risk because he doesn’t know what price he will receive for this year’s crop. He can reduce or eliminate the risk by selling wheat futures. According to the 4 T’s, this is a means of “treating” the risk.

Not according to the 4 T’s. They don’t cover this.

But reducing uncertainty works! Here is an example.

Suppose a rare genetic disease runs in a young man’s family. There is a 50-50 chance that he carries the gene. If he does, he will come down with the disease. Otherwise, he will not.

The man is exposed and uncertain, so he faces risk.

Now suppose the man’s doctor performs a genetic test to determine if the man carries the gene. Whether the test comes back positive or negative, the man’s risk will be eliminated. Why? Because his uncertainty will be gone. Like the man jumping from the airplane, he will face no risk.

So some risks can be reduced or eliminated merely by investigating them.

I know what you are thinking: Isn’t there a synonym for “investigate” that begins with T?

Sorry. I checked my thesaurus and found nothing.

It is not common, but some people describe risk responses with 4 R’s instead of 4 T’s. These are

And there is a synonym of “investigate” that begins with R. How about “research”?