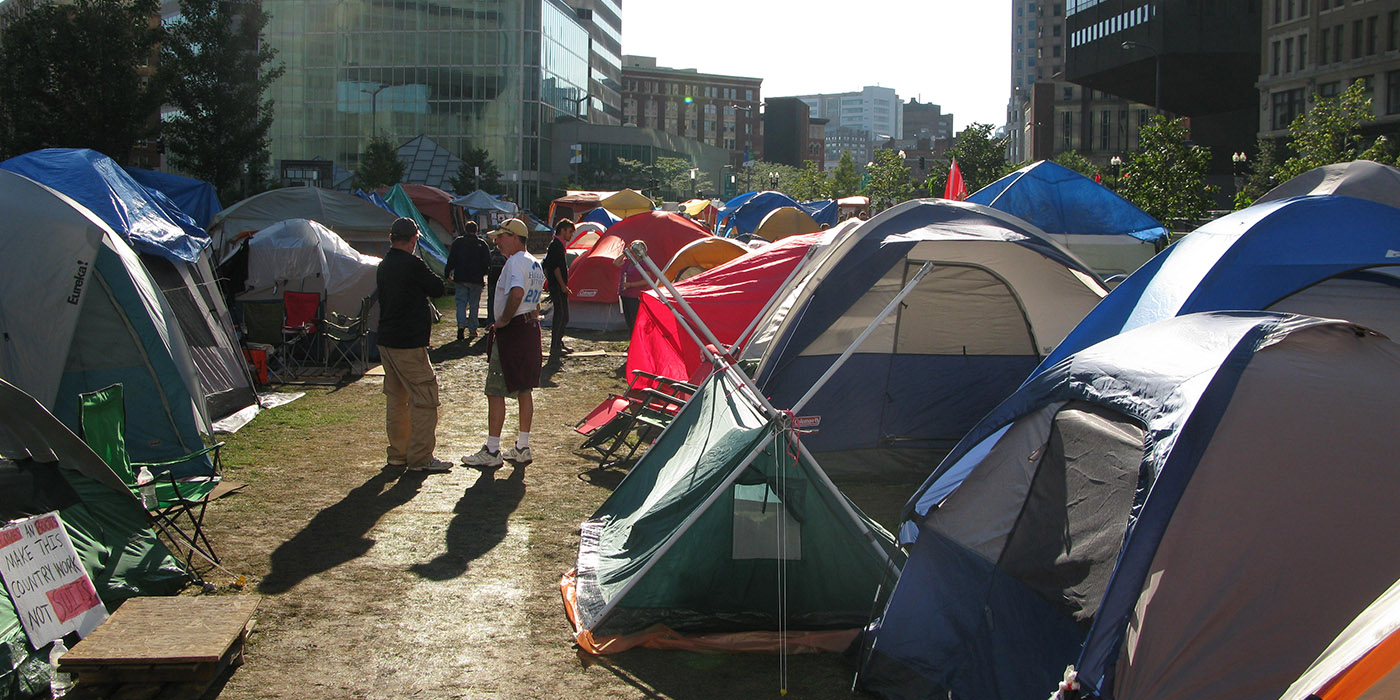 Yesterday, I headed over to Dewey Square for my first visit to a local outpost of Occupy Wall Street. They call themselves Occupy Boston. I found more than I expected, and less.

The closely spaced tents are a cacophony of colors, nestled among office buildings. To one corner is the venerable South Station, completed in 1899. The aluminum Federal Reserve building towers above, aging ungracefully. People were scattered among the tents, in pairs or small groups. There were few police officers, unlike in New York. I was surprised at the inactivity.

I approached a young man with long hair, chatting with a small group. When I asked for directions to the information table, he ignored me. They all did. I kept going and soon found the table on my own. It was staffed by a man and woman, twenty-something, who courteously answered my questions. When was general assembly? Would there be a march?

I moved on among the tents, feeling like an anthropologist unsure of how to engage the locals. A group of about fifteen, mostly men, was having an animated discussion. One was older, standing to the side in a sport coat—an outsider like me.

A bearded young man facilitated the discussion, calling on people who raised their hands. Instead of votes, they took “temperature checks.” Raising both hands indicated support. If 70% did so, it was sufficient to proceed. Another man occasionally explained procedural issues. The group showed him deference—there was a hierarchy. 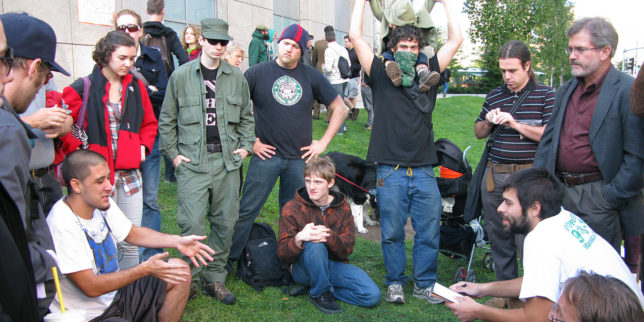 They were discussing the Federal Reserve, influenced—obviously—by Ron Paul’s book End The Fed. I was impressed by the enthusiasm of the participants, and their intelligence. Their knowledge of the financial system was pretty much what you would expect of a random group of people standing around in a park. When the group took a temperature check on whether the United States should return to the gold standard, support was almost unanimous. I had to intervene, so I gave them a brief lesson on America’s experience with the gold standard during the nineteenth century.

I made my way over to the media tent and asked a young man about the movement’s lack of message. His mechanical response indicated how often he was hearing the question:

The media is pushing us to come up with demands so they can brand us and cause division. We are not going to be rushed.

I have read more or less the same response several times on the movement’s websites. The demonstrators are in denial, treating a nagging lack of message as if it were a problem with the media. I want to support them, but what exactly am I supporting? If it is that America should return to the gold standard, count me out.

A young man wandered up and introduced himself. His name was Douglas Witt, and he was working on the movement’s newspaper, Occupy Boston Globe. It appears on-line, but they are hoping it can come out in print. Mostly it has focused on practical information for the campers, details like where to shower or get supplies. I suggested that Barack Obama was taking their movement for granted. Douglas responded that he supports Republican candidate Gary Johnson, the former two-term governor of New Mexico. Johnson is a libertarian who dramatically cut spending while trying to legalize marijuana in the state. He supports abortion rights and same-sex marriage. The Republicans have largely ignored him.

People were assembling for the evening’s march. Their destination was a homeless shelter. With faded jeans, t-shirts and signs, they numbered maybe 150. Someone started a chant, and they headed out:

The ragtag army made its way through an intersection, heading towards the setting sun. Then the traffic light changed, and a swarm of office workers came the other way. Men in ties and women in skirts, heading towards the trains at South Station. Commuters all, these were not the 1%, but were they the 99%? With blank faces looking straight ahead, three-to-one they outnumbered the demonstrators who had just passed. 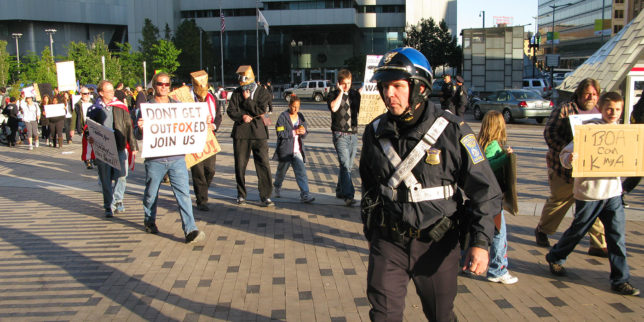 The traffic light changed again, and Dewey Square emptied. The only sound was of passing cars. I could no longer hear the demonstrators’ chanting, but it played in my mind: This is what democracy looks like.