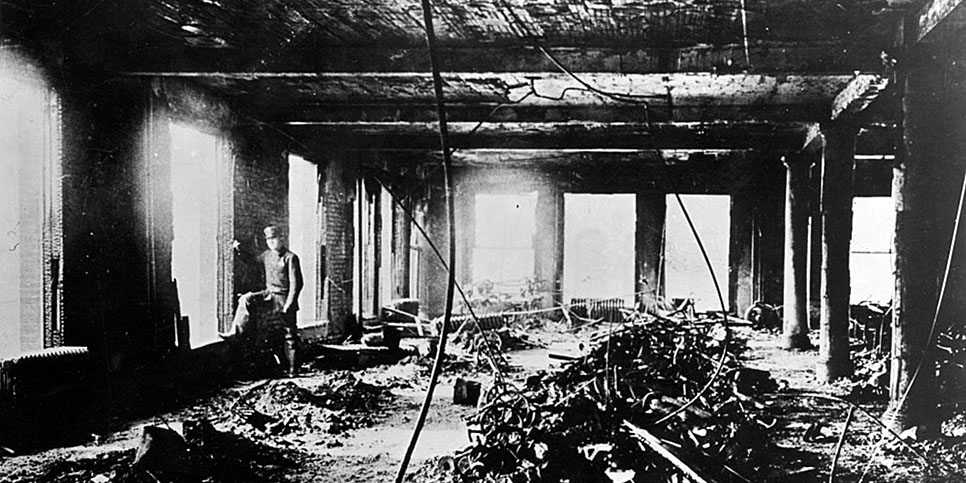 March 25, 2011 marks the hundred year anniversary of the Triangle Shirtwaist Factory fire. One hundred forty-six workers perished in a blaze that engulfed the ten story Asch Building in lower Manhattan. Most were young seamstresses who worked six days a week for a pittance. The tragedy unfolded blocks from where, ninety years later, the twin towers were similarly destroyed by fire. In both calamities, trapped individuals had to choose between death by fire or death by jumping to the pavement below. In both 1911 and 2001, onlookers watched in horror as the consequences off that terrifying choice played out.

A shirtwaist was a blouse. The fashion of the day had women wearing shirtwaists with ankle-length skirts. Triangle was a leading manufacturer of shirtwaists, but there was competiton. The firm was founded by Max Blanck and Isaac Harris, who had emigrated from Russia. Since the age of Jackson and Thoreau, Americans had been captivated by a vision of individuals pulling themselves up by their bootstraps. That had worked for Blanck and Harris, as well as many others. But that American Dream—the phrase itself would not be popularized until 1931—had a dark side. It was used not only to motivate those who might embrace America’s opportunity, but also to denigrate weak or exploited people for whom opportunity was less forthcoming. America was the land of freedom where everything was a marketplace, so the thinking went. If the seamstresses of Triangle wanted shorter hours, safer working conditions, or more pay, all they had to do was bargain for it.

What makes the Triangle fire especially poignant is the fact that the seamstresses of Triangle—impoverished young female emigrants, most of them Jewish—had tried and failed to do precisely that. In September 1909, they had organized a strike that 20,000 workers from shirtwaist factories across Manhattan joined. They demanded the right to form a union.

Hit by the strike, factory owners were already under financial pressure. Competition had squeezed profit margins. And demand for shirtwaists was dropping as women turned to wearing more dresses. No matter how much beautiful lace they stitched onto their shirtwaists, the owners’ sales continued a decline. Desperate to cut costs, the owners had squeezed their workers, and now they resisted the strike ferociously.

It became New York’s largest work stoppage to date, dragged on for five ugly months. Striking women were arrested by police for vagrancy or incitement. The owners hired thugs and prostitutes to threaten and assault strikers in the streets. Without income, the strikers and their families faced starvation. For a time, Anne Morgan, the daughter of J. P. Morgan, broke with respectable society and gave the strikers money. This was America’s Progressive Age, so she wasn’t alone. But as strikers pressed their demand to have a union, Anne Morgan decided this smacked of socialism and withdrew her support.

With fashion season approaching, in February 1910, the owners agreed to negotiate. The seamstresses won a number of concessions, but their dream of having a union was quashed. A year later, perhaps caused by a careless smoker, the Triangle fire broke out.

As at Tower One of the World Trade Center, surviving largely depended on what floor someone was on. Workers on the building’s first eight floors received early warning of the fire and evacuated. Blanck and Harris were on the tenth floor. Notified by phone, they climbed to the roof and crossed over to a neighboring building. They did not bother to warn workers on the ninth floor, who continued to work amidst the din of sowing machines.

For those workers, there would be four possible avenues for escape: freight elevators, a fire escape, a front staircase, and a back staircase. The elevators saved some but stopped running after a few trips. Seamstresses crowded onto the fire escape, which collapsed under their weight. The front staircase was engulfed in flames. That left the back staircase. Blanck and Harris had adopted a policy of searching workers as they left the building each day. This was to ensure no one stole merchandise. To prevent anyone from sneaking out the back, the door to the rear staircase had been firmly locked.

Outside, firemen worked gallantly, but their ladders didn’t reach high enough. On the ninth floor, women and a few men crowded at windows with the fire at their backs. They looked down at the people, and those people looked up. But it was more than distance that separated them. The workers were doomed.

In days that followed, smoke cleared and bodies were removed. New York’s response was dramatic. A year before, the city had mostly turned its back on the striking seamstresses. Now, in death, it embraced their cause. A hundred thousand mourners marched in a funeral procession with 250,000 lining the route. An editorial cartoon in the March 18, 1911 New York Evening Journal captured the mood:

Who is responsible? Who is responsible for the murders of one hundred and forty-five young girls and men in the “fire proof” fire trap? On whose head rests the blame for the inadequate, antiquated, criminal stairs and single fire escape, made possible because the building was classed as “fireproof”? These dead girls cry aloud, not for revenge, but for justice. Their flame-racked bodies demand protection for the thousands of sister toilers who have not yet been sacrificed to fire. Their silent lips call, “Who is responsible?”

People demanded reforms. The United States had always been a capitalist nation—and it always would be. But there needed to be rules. New York State lead the nation in reforming labor laws and implementing safety regulations. Fire drills, exit signs and building occupancy limits are all legacies of the Triangle Shirtwaist Factory fire. The tragedy propelled the US labor movement and especially the International Ladies’ Garment Workers’ Union.

Blanck and Harris denied knowing the back door was locked and were acquitted of manslaughter. They lost a subsequent civil suit in which plaintiffs received compensation of $75 for each death. This was more than covered by a substantial insurance settlement paid to the pair. In 1913, Blanck was arrested for again locking the door in a factory during working hours. He was fined $20.