How To Steal a Corporate Election 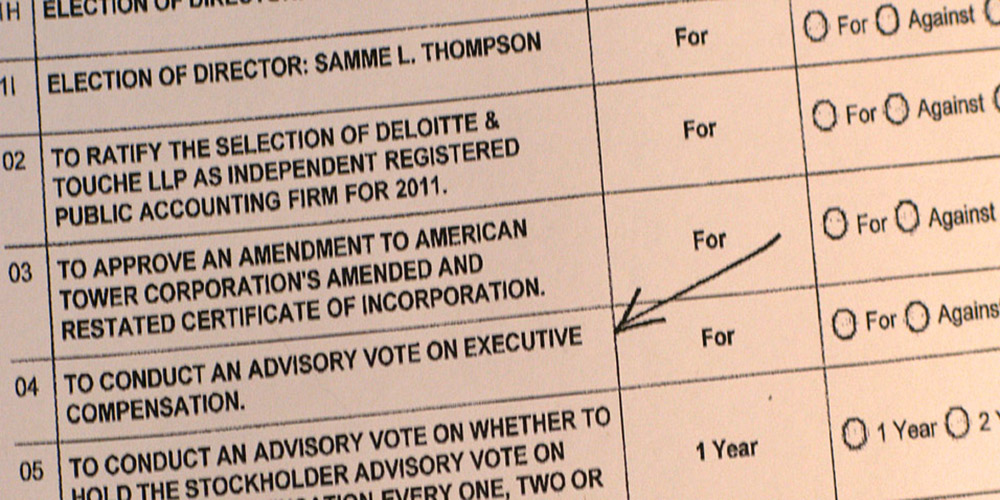 There are plenty of ways to steal an election. Some require guns. Others depend on bribes. Perhaps the simplest involve misleading ballots. For its corporate election this year, American Tower Corporation (AMT) has produced a humdinger. Item 04 of their ballot (technically a VIF; I will explain this legal nicety some other time) gives shareowners the option of voting “for”, “against” or “abstain” for the following:

TO CONDUCT AN ADVISORY VOTE ON COMPENSATION

In years past, shareowners have placed similar “say-on-pay” items on other corporations’ ballots. These tended to garner strong support as shareowners, concerned about lavish executive compensation, sought an opportunity to weigh in. But last year’s Dodd-Frank financial reform act mandated say-on-pay votes at all public corporations. So why should American Tower shareowners be voting for or against something that is now legally mandated? The answer is: they are not. If you read the small print in the proxy materials American Tower filed with the SEC, you will find that item 04 is actually a vote on

So item 04 is not about approving say-on-pay votes at American Tower. It is a say-on-pay vote, with a “yes” vote counting as approval of the firm’s executive compensation practices. The VIF indicates shareowners are voting on one thing when they are actually voting on something else. American Tower’s CEO, James D. Taiclet, Jr., by the way, earned an eye-popping $6.2 million in 2010.

The above discrepancy was caught by eagle-eyed shareowner John Chevedden. He wrote the SEC a letter about it, but he doesn’t expect they will do much. Corporate democracy hasn’t been a priority at the commission in decades.

John actually catches a fair number of similar abuses. Last year, he submitted a proposal for inclusion in Altera Corp’s (ALTR) proxy materials. Here is how that proposal was described on the company’s VIF. See if you can make sense of it:

TO CONSIDER A STOCKHOLDER PROPOSAL REQUESTING THAT BOARD TAKE THE STEPS NECESSARY SO THAT EACH STOCKHOLDER VOTING REQUIREMENT IN ALTERA’S CERTIFICATE OF INCORPORATION.

It is nonsense, giving the impression some shareowner submitted an incoherent proposal. An accompanying note that the board recommended a “no” vote would all but ensure the proposal’s defeat.

John wrote a letter to the SEC to complain. Altera responded by distributing an amended description to shareowners, which read:

It is hard enough to get shareowners to vote, let alone to get them to read the proxy materials. Furthermore, some shareowners had already submitted their votes. As John noted at the time:

The bottom line is that some of the damage has been stopped part-way in mid-stream.

Many corporations allow shareowners to vote on-line. Back in 2009, John noticed a quirk in how such on-line votes are processed. For most items, shareowners can vote “for”, “against” or “abstain”, but what happens if a shareowner leaves an item bank? You would think that would be counted as an abstention. That isn’t what happens.

The vast majority of proxy voting is facilitated by a single vendor with whom corporations contract: Broadridge Financial Solutions (BR). Broadridge doesn’t treat blank votes as abstentions. They record them as cast according to board recommendations. If the board recommends shareowners vote items a particular way, that is how Broadridge records blank votes.

Let me illustrate. Earlier today, I went on Broadridge’s website

to vote my Intel Corp (INTC) shares. The site provides a prominent button for voting all items according to the board’s recommendations. Otherwise you have to vote items one-by-one. It requires some dexterity. You can see in the accompanying image that my aim must have been off clicking the third item. I missed, leaving it blank. When I clicked “submit” at the bottom of the form, a confirmation page came up. If you look closely, you will see my blank vote was recorded as cast according to the board’s recommendation. 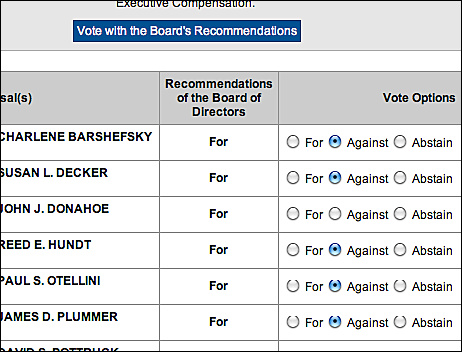 How I voted for Intel Corp. board candidates 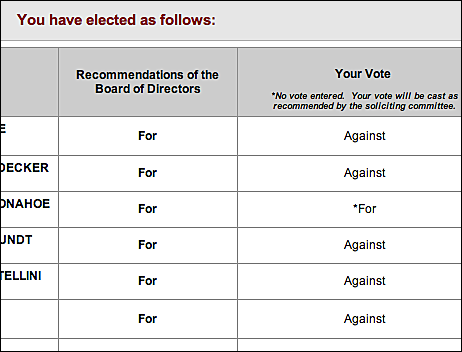 How my votes were recorded

On May 15, 2009, I joined Jim McRitchie and eight other shareowners in filing a petition for rulemaking with the SEC. We asked the commission to require that blank votes be treated as abstentions, which is what they are. That was two years ago. To date, the SEC has done … nothing.