A convertible security’s investment value is what the market value of the convertible security would be if it were stripped of its conversation feature. This reflects the security’s future cash flows, current interest rates, the issuer’s credit quality, and any other features such as put or call provisions other than the conversion option. Investment value isn’t generally observable in the marketplace, but it is a useful notion that can be ascribed a value using standard bond pricing or financial engineering methodologies.

A convertible security’s conversion value (or parity value) is the value that could be realized by immediately converting the convertible to common stock. It is easily calculated as

Obviously, both premiums should be nonnegative. 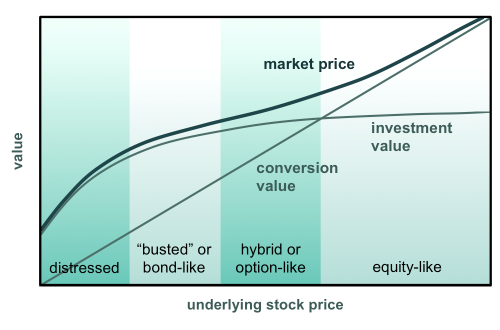 Exhibit 1: Convertible securities exhibit four different modes of behavior depending on the level of the underlying stock price and the credit quality of the issuer.

These are also indicated in Exhibit 1.

A convertible’s behavior is equity-like when its conversion value exceeds its investment value, and the bond behaves like an in-the-money option. Its value fluctuates almost directly with the underlying stock price.

The convertible’s behavior is hybrid- or option-like at lower stock prices where the conversion value is less than the investment value but there is still a reasonable likelihood of the stock price rising enough to make conversion attractive. In this state, the convertible exhibit’s truly hybrid behavior. Its market price is sensitive to the underlying stock price, interest rates, implied volatilities and the issuer’s credit quality.

At still lower stock prices, the conversion option is so far out of the money that it is almost worthless. Here, the convertible is called busted. Its behavior is much like a non-convertible bond or other fixed income instrument. Its market price fluctuates with interest rates and the issuer’s credit quality.

Finally, if the issuer becomes financially troubled, its credit rating will fall well below investment grade and the stock price will plummet to very low levels. Here the conversion feature is all but irrelevant. The convertible is a distressed security whose market price fluctuates primarily with the credit quality of the issuer.

Because convertibles can be so difficult to value, there is a perception that they are frequently mispriced in the market. Convertible arbitrage is a market neutral trading strategy that seeks to profit from such mispricings.